This is such an expansive subject that we need to make this a series to properly cover all the areas with you.

First we want to do a little Q & A on Angels. Since this from a biblical perspective we will be sharing the scriptures for all the questions that we will be answering.

The word Angel in the Hebrew is Mal’ak which means “messenger, representative, angel, theopanic angel”. Greek is aggelos which means messenger. Angels are spirit beings. Hebrews 1:14 (NKJV) “Are they not all ministering spirits sent forth to minister for those who will inherit salvation?”

When was the first time angels are mentioned in the bible?

Are there different types of angels?

Cherubim – Genesis 3:24 “After sending them out, the Lord God stationed mighty cherubim to the east of the Garden of Eden. And he placed a flaming sword that flashed back and forth to guard the way to the tree of life.”

Do the angels have an hierarchy?

Yes, if you read Ephesians 6:12 there seems to be an order in which the angelic realm is listed which would cause one to believe that there is an hierarchy with the angels.  There are different levels to the angels,

Ephesians 6:12 (NKJV) “For we do not wrestle against flesh and blood, but against principalities, against powers, against the rulers of the darkness of this age, against spiritual hosts of wickedness in the heavenly places.”

What is an archangel?

We shared earlier Daniel 10:13 which talks about the archangel Michael, if you read the same scripture in the KJV version of the bible it refers to him as a “chief prince” which would suggest this is the highest level of an angel.

How many archangels are there?

This is a tricky one. If you are Catholic you may say 7 (using other references/books outside of the bible). If you are Protestant you’ll say 3 (based on the bible). There are some that even say there are 4 referencing Revelation 7:1.

The truth is that the bible only references Michael as an archangel (Daniel 10:13). Protestant and Catholics call Gabriel an archangel as well even though he is never referred to as one in the bible. This is due to his important role of bringing messages to Mary (Luke 1:26) and to Daniel (Daniel 8:15-16). The 3rd archangel is Lucifer (Isaiah 14:12) this, of course, is the devil himself who was cast out of heaven along with 1/3 of the angels (Revelation 12:4). This is where it said there there are 3 archangels because each of the angels had 1/3 of the angels under them.

What are the names of the archangels?

Where do the angels live?

In the heavenly realms (Ephesians 6:12) and also on earth. Remember 1/3 of the angels were cast out of heaven.

Then I heard a loud voice saying in heaven, “Now salvation, and strength, and the kingdom of our God, and the power of His Christ have come, for the accuser of our brethren, who accused them before our God day and night, has been cast down. And they overcame him by the blood of the Lamb and by the word of their testimony, and they did not love their lives to the death. Therefore rejoice, O heavens, and you who dwell in them! Woe to the inhabitants of the earth and the sea! For the devil has come down to you, having great wrath, because he knows that he has a short time.”

Yes! guardian angels are personal angels assigned to each one of God’s children.

Psalm 91:11-12 (NKJV) “For He shall give His angels charge over you, To keep you in all your ways. In their hands they shall bear you up, Lest you dash your foot against a stone.”

Isn’t that reassuring??!! Notice it says angels with an “s” so you have more than one. And, depending on what you need to do at the appointed time God sends more to help. You are in good hands!!

What is the name of my guardian angel?

The only angels in the bible that had names were the archangels. At no other time did the angels have names. They were sometimes referred to by their assignments but never by a name. For example you have angel messengers that were sent to give messages (Genesis 19:15), you have destroying angels Acts 12:15, Exodus 12:23, you have protecting angels or those that are posted as guards (Genesis 3:24). Sometimes Christians will say that there is an angel and his name is turnaround or breakthrough or even restoration. They are more likely known by their assignments or purpose for which they were sent instead of a given name.

Therefore, you shouldn’t concern yourself with finding out the name of the angels that are assigned to you. If God didn’t think it necessary to tell us the name of every single angel then it means it’s not important. Besides, since we know they have hierarchy there is a possibility as you grow in the Lord there may be different ones assigned to you at different times. Focus on God and not the angel.

Can I see my angel?

If you have the ability to see in the spirit realm then yes. If you can’t see them don’t worry about it, they are there! Here’s the story of Elijah and his servant who was not able to see the angels.

2 Kings 6:15-17 “And when the servant of the man of God arose early and went out, there was an army, surrounding the city with horses and chariots. And his servant said to him, “Alas, my master! What shall we do?” So he answered, “Do not fear, for those who are with us are more than those who are with them.” And Elisha prayed, and said, “Lord, I pray, open his eyes that he may see.” Then the Lord opened the eyes of the young man, and he saw. And behold, the mountain was full of horses and chariots of fire all around Elisha.”

No! We don’t pray to angels we pray to God. Then, God will command the angels..YOUR angel on what to do.
2 Chronicles 32:21 “Then the Lord sent an angel who cut down every mighty man of valor, leader, and captain in the camp of the king of Assyria.”

1 Chronicles 21:27 “So the Lord commanded the angel, and he returned his sword to its sheath.”

Angels only respond to the word of God so they are not just going to do anything you ask them to do, unless you are talking to demons (part of the 1/3 that was thrown from heaven)

What are fallen angels?

Do my loved ones turn into angels when they die?

No. Angels are spirit beings and are not the same as humans. Your loved ones don’t turn into angels when they die. Your grandmother will not be returning as your guardian angel. Read Revelation 4. When we die we go to heaven where we worship God forever. We are not sent back to watch over people. This is the job of the angels and God not human beings. 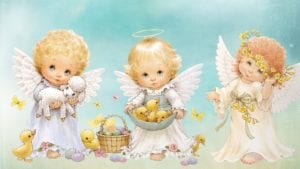 of a human being.  Otherwise you would probably jump out of your skin if you saw them as they really are. Remember they come with a purpose so the conversation will be very limited and they will probably just give you the information, or help you with whatever you need at the moment and quickly be on their way.  They don’t have the cutesy appearance that is usually depicted like this image to the right.  There are a few verses in the bible that describe their appearance.  You should also know that they don’t all look the same.  And they are different sizes. Here are some scriptures Ezekiel 10:9-14, 2 Kings 6:15-17,Isaiah 6:1-2,  Daniel 10:5-6

Is Jesus an Angel?

Jesus is referred to as the Commander of heaven armies. This means He is in charge of the angels. Which makes sense since you have to pray to God/Jesus in order for the angels to do your bidding. Also want to point out that when you read the bible in the KJV & NKJV version you will notice that sometimes it refers to Angel with a capital A and then angel with a common letter a. It will say the Angel of the Lord which is actually Jesus. This is known as a theophany, the theophanic Angel of the Lord which is the visible form of God – Jesus appearing in the Old Testament. You can also know the difference because people will bow down and worship him but if they attempt to worship an angel,  the angel will quickly correct them by saying “get up and don’t worship me, worship God”. Here are some references.

First, a scripture about the Commander of the angels, the theophany of Jesus in the Old Testament…

Joshua 5:13-15 (NKJV) “And it came to pass, when Joshua was by Jericho, that he lifted his eyes and looked, and behold, a Man stood opposite him with His sword drawn in His hand. And Joshua went to Him and said to Him, “Are You for us or for our adversaries?”So He said, “No, but as Commander of the army of the Lord I have now come.”And Joshua fell on his face to the earth and worshiped, and said to Him, “What does my Lord say to His servant?”Then the Commander of the Lord’s army said to Joshua, “Take your sandal off your foot, for the place where you stand is holy.” And Joshua did so.”

Genesis 22:11-12 (NKJV) But the Angel of the Lord called to him from heaven and said, “Abraham, Abraham!”So he said, “Here I am.” And He said, “Do not lay your hand on the lad, or do anything to him; for now I know that you fear God, since you have not withheld your son, your only son, from Me.”

1 Chronicles 21:16 “Then David lifted his eyes and saw the angel of the Lord standing between earth and heaven, having in his hand a drawn sword stretched out over Jerusalem.”

If you read the entire 1 Chronicles 21 you can see God commanding the angel of the Lord on what to do.

Here is what happened when the apostle John tried to worship an angel.

We hope you enjoyed this.  We would also love to hear about your encounters with angels and you can write it in the comments below.

In Part 2 of the Angel Series we’ll talk more about the archangels. Click here to read part 2 on Archangels.