If you missed Part 1 of the Angel Series you can take a look at that here.  In Part 1 we did a Q & A on Angels.  In Part 2 we will talk about Archangels. This is an important series because there is a lot of information on the internet about angels that is not from a biblical perspective.

Most mention God and heaven but there is no scripture to back up any of it and that is a little scary.  Especially knowing that 1/3 of the angels were thrown to the earth as fallen angels, we have to be mindful that praying to these beings could land us in a place where we may be communing with demons.

So here is the post that talks about archangels…

Archangels are the chief angels in heaven.  Which means they are the highest ranking angel. (Jude1:9) “Even their chief, Michael, when disputing with the devil over Moses’ body, did not offer his own taunting judgment against him. Michael simply said, “May the Lord’s rebuke fall on you.”

How many Archangels are there?

This point is completely debatable!  If you’ve read the book of Revelation then you will see many different angels that have great importance in God’s plans.  You’ll see that there are 7 angels assigned to the 7 churches Revelation 2.  You also see that there are 4 angels that are at the four corners of the earth Revelation 7.  They are never specifically referred to as archangels but, they could be!  They have assignments and they are referred to as the first angel, through to the seventh angel and each with a specific job and territory. After these scriptures in Revelation it goes on the specifically talk about Micheal and the devil.

Revelation 12:3-9 “And there appeared another wonder in heaven; and behold a great red dragon, having seven heads and ten horns, and seven crowns upon his heads. And his tail drew the third part of the stars of heaven, and did cast them to the earth: and the dragon stood before the woman which was ready to be delivered, for to devour her child as soon as it was born. And she brought forth a man child, who was to rule all nations with a rod of iron: and her child was caught up unto God, and to his throne. And the woman fled into the wilderness, where she hath a place prepared of God, that they should feed her there a thousand two hundred and threescore days. And there was war in heaven: Michael and his angels fought against the dragon; and the dragon fought and his angels, And prevailed not; neither was their place found any more in heaven. And the great dragon was cast out, that old serpent, called the Devil, and Satan, which deceiveth the whole world: he was cast out into the earth, and his angels were cast out with him.”

In the bible there is only 1 angel that is referred to as an archangel and that is Michael.  (Jude 1:9) “Yet Michael the archangel, when contending with the devil he disputed about the body of Moses, durst not bring against him a railing accusation, but said, The Lord rebuke thee.”

In this same scripture we see that he is fighting the devil which means that they may be equal in power. Both Michael and the devil have angels that fight under them.  We’ve bold the scriptures where it says “his angels”.

It is important to know that satan and Jesus are not on the same level.  God, Jesus, is the creator and angels are created beings.  Jesus is way above all powers, principalities or any archangel.  Satan’s equal then becomes Michael or Gabriel.

Gabriel is the 3rd implied archangel.
(Luke 1:19) “And the angel answered and said to him, “I am Gabriel, who stands in the presence of God, and was sent to speak to you and bring you these glad tidings.”  Gabriel was sent to deliver the news to Mary about her conception of Jesus.  He says that he stands in the presence of God.  We know from those scriptures in Revelation that the angels that are standing in his presence are the chiefs. 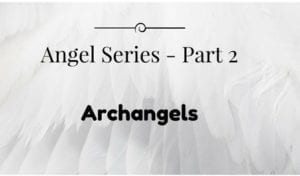 What are the names of the archangels?

Michael, Gabriel and Lucifer who became the devil when he was cast out of heaven

How fast do they travel?

Super fast! In Daniel 9 we see that while Daniel was in prayer God sent the answer through the archangel Gabriel. He was still praying when Gabriel showed up.

Is there an archangel prayer?

No.  We are not to pray to archangels.  We pray to God and He will send the angels.  Daniel 9 shows how the angels go out on assignments (Daniel 9:20-23) “Now while I was speaking, praying, and confessing my sin and the sin of my people Israel, and presenting my supplication before the Lord my God for the holy mountain of my God, yes, while I was speaking in prayer, the man Gabriel, whom I had seen in the vision at the beginning, being caused to fly swiftly, reached me about the time of the evening offering. And he informed me, and talked with me, and said, “O Daniel, I have now come forth to give you skill to understand. At the beginning of your supplications the command went out, and I have come to tell you, for you are greatly beloved;

What’s their purpose? What do the angels do? This is related to all angels and not specifically the archangels

They guard and protect – Genesis 3:24 (ESV) “He drove out the man, and at the east of the garden of Eden he placed the cherubim and a flaming sword that turned every way to guard the way to the tree of life.”

They deliver messages in person – Luke 1:11-13 (ESV) “And there appeared to him an angel of the Lord standing on the right side of the altar of incense. And Zechariah was troubled when he saw him, and fear fell upon him. But the angel said to him, “Do not be afraid, Zechariah, for your prayer has been heard, and your wife Elizabeth will bear you a son, and you shall call his name John.”

They deliver messages through dreams – Matthew 1:20-21 (ESV) “But as he considered these things, behold, an angel of the Lord appeared to him in a dream, saying, “Joseph, son of David, do not fear to take Mary as your wife, for that which is conceived in her is from the Holy Spirit. She will bear a son, and you shall call his name Jesus, for he will save his people from their sins.”

They deliver messages through visions  – Daniel 4:13-14 (ESV) ““I saw in the visions of my head as I lay in bed, and behold, a watcher, a holy one, came down from heaven. He proclaimed aloud and said thus: ‘Chop down the tree and lop off its branches, strip off its leaves and scatter its fruit. Let the beasts flee from under it and the birds from its branches.”

They are in charge of their own army of angels – This is specifically the archangel – Revelation 12:3-9 it says Michael has his angels and the devil has his.

They guide us in God’s destiny and purpose for our lives -Exodus 23:20 “Behold, I send an angel before you to guard you on the way and to bring you to the place that I have prepared.

They fight for God’s children – 2 Kings 19:35 “That night the angel of the Lord went out and put to death a hundred and eighty-five thousand in the Assyrian camp. When the people got up the next morning—there were all the dead bodies!”

They praise God day and night – Revelation 4:8 (ESV) “And the four living creatures, each of them with six wings, are full of eyes all around and within, and day and night they never cease to say,“Holy, holy, holy, is the Lord God Almighty, who was and is and is to come!”

In Part 3 we talk about Guardian Angels.

Have you ever encountered an angel?  We’d love to here your story share it below in the comments

Angel Series – What are Angels? Part 1