This is Part 2 of 4 Prophetic Words for the month of December 2019.  I had a difficult time coming up with the correct title but decided to settle on this one.

Despondent means being unhappy and discouraged because you feel you are in a situation that is unlikely to improve.  I want to make a distinction that I am not referring to being sad during the Christmas season because of the loss of a loved one.  This is a separate thing.  I’m referring to the despair and discouragement you feel because you are not where you thought you should be at this time of year. Why December?  It’s the end of the Gregorian calendar and many believe they should be much further along than they are.  So as they days tick by and things appear to be the same the despondency starts to set in.

The truth is, it’s a timing issue!

The enemy preys on people at this time of year to get them to become hopeless and depressed reflecting on what they have lost and what they don’t have.  If December were somehow turned into June, you wouldn’t be sad at all!  You would be thinking you still have 6 months to go. Selah.

So, your mindset needs to change in order for you to get out of despondency.  My prayer for you is that this post will help you change the way you are thinking and have the best Christmas and New Years you’ve had in years!!

This prophetic word is directed at 2 groups, those who feel despondent during the December and those who are seeing the number 12.

If you read part 1 of the December prophetic word we talked about God speaking to us through numbers.  I want to specifically address the people who have been seeing the number 12.  No, this doesn’t mean you sit there and wait till the clock turns 12 to say you’ve seen it.  You will know right away if this is you or not.  Generally these go on for a few days and then it stops.

If you’ve been seeing this combination alot, I’m speaking to you.  This is the Apostolic number.  The governmental rule and authority, the number that brings structure to things.  The dawning of a new day.  It is a number for promotion. 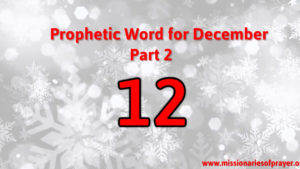 some biblical reference of this:

And then of course 12 months in a year

Generally you will start seeing this number when God is calling you into a new level of authority.  It is a promotion.  We are talking about spiritual authority but this could also be promotion on the job and in any of the 7 mountains (government, media, education, church, military, family, business).

If you think in terms of a clock it is a start of a new day.  Moving forward.  Progressing.

When you see the 12 it becomes a signal from God that you are moving to another level.  You are being promoted.  Hence these numbers don’t stay around as long as the 11:11 or 1:11, which means transition.  We generally take longer to transition from one place spiritually or physically to another.  The 12s will come in a series and then you won’t see them anymore.  God is just letting you know that you have promoted into another level.  You need to pray for understanding to know what is the promotion, and what is now required of you at this new level.  If it was a job promotion it is easier to know what it is but when it is a spiritual promotion you need to pray through the meaning.

You will then move into a season when you won’t see the 12s anymore until it’s time for your next promotion.  When you see the 12s, unlike the 11s, there is nothing for you to do.  It’s just for you to know you are at another level.

Joseph, worked in the government of Egypt.  We’ve written about this mantle and you can read it here.  You can see through his life the progression and promotions into his governmental role

It would’ve been easy for him to be despondent and in despair with his brothers trying to kill him, being falsely accused, going to jail for something he didn’t do. You must know that this is normal for you to feel this way from time to time.  Just read the Psalms and you can see many times where David is crying out to God for relief and he speaks alot about his despair and his soul being downcast.  The key is not to stay in that place.

I want you to frame the despondency with timing.  And think of it as a timing issue more than anything else.  What happens if we move out of God’s timing and get what we want when we want it?

Imagine what would happen if Joseph’s brothers didn’t try to sell him?  He wouldn’t have been in Egypt to help his entire family and the Israelites when they needed help.

Imagine if the Cup bearer did in fact tell the Pharaoh of Joseph’s plight and he did get out of prison?  Joseph would be out of prison but he would still be a slave.

The Pharaoh needed to have a dream.  That was it.  One dream changed everything.  Therefore, Joseph wasn’t delayed or off schedule.  No, he was right on time. 7 years of plenty and 7 years of famine followed and he needed to be in position for that and he was!

You’re also not off schedule… your Pharaoh has not had his dream yet!  December is just one more month closer to that happening.  Keep your eyes focused on your promise and not on the month of December. No longer should you think “oh my goodness, it’s the end of the year and I still don’t have… ”  Instead, think of it as one month closer to your promise.

And, notice when Joseph came out he didn’t need to “fake it until he made it” he just did what he already knows how to do, interpret a dream.

The same thing is going to happen with you.  You will be ready. You are being prepared to receive. But you can’t rush the timing because God needs to have people in place and in the right position in order for these things to happen.

It’s not just about December, it is about your destiny and that is bigger than 1 month.

Joseph already knew his destiny for 13 years before he stepped into it when he had the dream as a teenager.  Same thing with David, he knew for 17 years before he became king.  But, the process is still the process and none of us is exempted from that.  I know we all love those “suddenly” words and the “acceleration” words but these things still only come after the process.

For those of you who feel like you already had your promise but somehow you lost it.  Let’s say you made a mistake and lost your dream job and you believe it was the best thing ever.  Well, I have some news  for you…I’m sure Joseph also thought his job in Potiphar’s house was also great!  He was the chief Comptroller. But guess what?  It wasn’t the ultimate job.

Joseph’s end was so great that he named his son Mannaseh which means “causing to forget”…he didn’t even remember all the things he had to go through.

Whatever you lost was your stepping stone!  A job, a promotion, a house, a car, a relationship…it was training ground so don’t cry over that.  You’ll handle the true promise much better because you went through that.  You’ve learnt some thing! Watch what God is going to do…wherever you end up you’ll realize you needed that experience to walk out what God has planned for you.  When God blesses you with what was promised you won’t even remember any of your past pain (Ecclesiastes 5:20)

Your Pharaoh has not had his dream yet!

So you need to keep moving forward until that happens.  You are not in charge of that, God is and it will happen in His timing.  Don’t allow the enemy to pull you into a pit of despair over the Christmas season.  Your destiny is bigger than one month.

I asked the Lord for a scripture to support this prophetic word and this is the one He gave me.

6 If you bow low in God’s awesome presence, He will eventually exalt you as you leave the timing in His hands.

7 Pour out all your worries and stress upon Him and leave them there, for He always tenderly cares for you.

8 Be well balanced and always alert, because your enemy, the devil, roams around incessantly, like a roaring lion looking for its prey to devour.  9 Take a decisive stand against him and resist his every attack with strong, vigorous faith. For you know that your believing brothers and sisters around the world are experiencing the same kinds of troubles you endure.  10 And then, after your brief suffering, the God of all loving grace, who has called you to share in His eternal glory in Christ, will personally and powerfully restore you and make you stronger than ever. Yes, He will set you firmly in place and build you up.  11 And He has all the power needed to do this—forever! Amen.

I can’t add anything else to this.  Blessings