You know in 2018 there were so many amazing promises from the Lord that should have been fulfilled for many of you.  But it seems that everyone one I spoke with were extremely hopefully but still waiting…and waiting…and waiting.  And then the big question was, what is going on? Why is there such a delay on everything and with everyone.  You’ve heard numerous words on..No More Delay, but guess what? You’re still in the delay.

It seems people from all over were experiencing the same thing. Excitement but no fruition.  I was positive in December a lot of you were going to have major breakthroughs.  And in the spirit I felt like everything was being approved in the heavenlies but there was this backup.  Like a clog in a drain. God is pouring blessings from heaven but nothing was going down unto the earth for His people.

So I started asking God, what is going on?  Why the hold up?

He started walking me through a process of putting the 7 days of prayers and fasting together in December.  We do this at the beginning of the year but I wasn’t aware that the fast was actually the answer to my question of ‘why the delay?” and that nothing was getting released until we did it in January.

We started on January 7th with the 1st group for one week of fasting and there were tremendous amounts of breakthrough for the participants who did the prayers and exercises. So much so that a number of them continued with the other weeks to see what else would break open.

I’m telling you all of this because even up to the 1st week in January, I still had no idea why God had us do the fast the way we did and what happened in the heavenlies for each person that followed through.

So this prophetic word is to explain to you.

The US Government shutdown is a picture of what is happening with you in the spiritual realm. Gridlock.
(Matthew 6:10) “…your kingdom come, your will be done, on earth as it is in heaven.”
In the spiritual realm you have, two  opposing sides trying to get their way.  Heaven and hell. Good and evil.

There’s a lot of back and forth going on now over your destiny.  This is a very critical year for you because we are ending one decade and beginning another. This is a year when we will begin to build our legacy.  Do you think the enemy is just going to let you walk into that without a fight?  Nope.

He is pulling out all his arsenal to stop you from getting what you have coming to you from the Lord.  So he’s going back into his vault and pulling out old stuff and bringing it up in the courts of heaven to hold up your blessings.  He is the accuser of the brethren so he’s going to find something to use against you.  There’s something that he has that he’s using to hold your blessings hostage.  Something or somethings.

Let’s talk about the courts of heaven….

This is the place the enemy goes to accuse you.

3 Then he showed me Joshua the high priest standing before the angel of the Lord, and Satan standing at his right side to accuse him. 2 The Lord said to Satan, “The Lord rebuke you, Satan! The Lord, who has chosen Jerusalem, rebuke you! Is not this man a burning stick snatched from the fire?”

3 Now Joshua was dressed in filthy clothes as he stood before the angel. 4 The angel said to those who were standing before him, “Take off his filthy clothes.”

Then he said to Joshua, “See, I have taken away your sin, and I will put fine garments on you.”

6 The angel of the Lord gave this charge to Joshua: 7 “This is what the Lord Almighty says: ‘If you will walk in obedience to me and keep my requirements, then you will govern my house and have charge of my courts, and I will give you a place among these standing here.

Joshua was dirty until he got cleansed and was given new garments.  And then he was given instructions…obey and following the requirements and then the Lord gave him more than he could imagine.

When we went through the fast God had us strategically pray things in a certain order and covering many areas that in essence cleared all the accusations and…dismissed the case!!!

Repentance removes the filthy garments and then you become clothe in the righteousness of Christ. It is that simple.

You only have one defense against the accusations, the blood of Jesus Christ.  That’s it.  This is not for you to make excuses for your sin, it is for you to repent of them.  Because if you do not, then nothing gets released.  Here is a list of sins that you can confess to start the process.

And this is the very reason why this is a personal and individual thing.  Everyone that was able to successfully address the charges brought against them got their prayers answered.  Others who refused to address the issues, it is still being held up.

Now after the repentance your filthy garments then gets replaced with clean robes of righteousness.  And, then we go to the next thing which is obey and follow the requirements.  This just means God is going to tell you what to do.  No more confusion and lack of direction.

If you are involved in some kind of sin that you regularly commit.  You will need to stop.  The enemy will just stand by waiting for you to go back to that and then your blessings roll to a trickle again.  If you repented of it, you need to stay clear of it.

Here is the courts of heaven prayer for you to pray at night that will help you see what the enemy is using against you.

Abba Father, you said if I seek you I will find you when I search for you with my whole heart,  with my whole heart I am asking you to reveal to me what is holding up my blessings in the heavenlies.  Show me what the accuser of the brethren is holding against me in the courts of heaven, in Jesus name, Amen

God will show you.  And this is your defense prayer, after you repent of it. Sometimes you need awhile to entangle yourself from it.  Once you are sure that this is over you present your case and your defense.

Abba Father, I thank you for revealing to me the sin of _________.  I confess that I have sinned against you and others by committing this sin. I ask you to wash me clean in the blood of Jesus that is payment enough for this wrong doing.  I repent and I accept the forgiveness for this sin.  I stand before you now not in my own filthy rags and righteousness but in the one that only Christ can give.  My defense against these sins is the blood of Jesus.  I am clothe in the Righteousness of Christ.  I ask that you dismiss these accusations against me and whatever blessings are being held up as a result of them be released now in Jesus name, Amen.

After you do this, just wait a day then go back into prayer and ask God to give you confirmation that this has been cleared.  He will show you.  If you notice that things are still at a trickle, go back to the first prayer and repeat the process because this could mean there are a few things.

This word and these prayers can be used at any time.

We still have one more week of the fast going.  It starts on January 28th through February 3rd.  The fast is very comprehensive so it it covering many 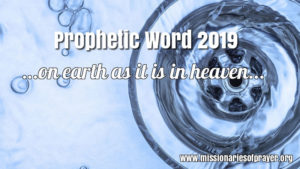 areas.  You can sign up for the fast up until midnight EST January 27th.  If you found this post after that, sorry.

For those of you who are reading this now, please share it.  Someone else could probably use this information.  I don’t want to see people struggling for a breakthrough at the end of 2019.

Please know that even though the government shutdown is on at the time this post is written and published that doesn’t mean people are not getting breakthroughs.  The shutdown is just a sign from God of an overall problem.  Those who have sought the Lord and cleared the accusations are receiving their blessings.  And, if you don’t live in the United States it doesn’t matter.  Again, this is a sign.  God is releasing blessings on an individual basis to those who seek Him out.

When the shutdown ends, this will mean that many of you who have followed the instructions in this word will be experiencing such an overflow of blessings.

Here’s the information to join the fast.