This is the First Fruit Blessing Prayer for the month of Elul.  If you want to know more about First fruit you can read this post.

This is the final month in the Jewish Calendar.  So think of it as the “December” of the Hebraic Calendar.

1) This is the month where people “take stock”, review what has happened in the past year, reevaluate where things are so they can move forward into a successful 5783 which is the New Year and starts on September 26th.  It’s time for deep introspection.

2) The word Elul is an acronym Ani le‑dodi ve‑dodi li–“I am my beloved’s and my beloved is mine” This is Song of Solomon 6:3 and it speaks of the closeness of God to His people.

3) Every day during Elul and leading up to the High Holiday (Rosh Hashanah) the shofar is blown to start the day as a call to repentance, with exception of the Shabat.

4)  The Selichot which is a prayer of repentance is done every day in the last week leading up to Rosh Hashanah.

6 And he passed in front of Moses, proclaiming, “The Lord, the Lord, the compassionate and gracious God, slow to anger, abounding in love and faithfulness, 7 maintaining love to thousands, and forgiving wickedness, rebellion and sin. Yet he does not leave the guilty unpunished; he punishes the children and their children for the sin of the parents to the third and fourth generation.”

Wow!  Pretty strong words right?  As far as I can see this takes repentance to a whole new level because it is saying repent or your children are about to suffer for what you did. Very interesting!

Why are the names of God listed as an attribute?  His name is actually a revelation of who He is.  If I say Jehovah Jireh, it is His name but it also one of His attributes as provider.  I think The Lord is said twice, because He’s putting an emphasis on the fact that He is Lord!

7) It is said in the month of Elul “the King is in the field”  this means that the King is more accessible to His people.  God is more accessible to you.  If you think about this, it makes sense since there is a lot of repentance happening this month.  We already know that sin separates us from God so just the act of repentance everyday will bring you closer to God.  Keeping this in mind, that means that the King can be “in the field” for you every day if you choose to live your life like this.  Take time this month to seek the Lord and draw nearer to Him.  Here’s a 3 part series on getting into the presence of God

Tribe for the month of Elul

The tribe for this month is Gad.  This is what Jacob said in his blessing of Gad:

“Gad will be attacked by a band of raiders,
but he will attack them at their heels. 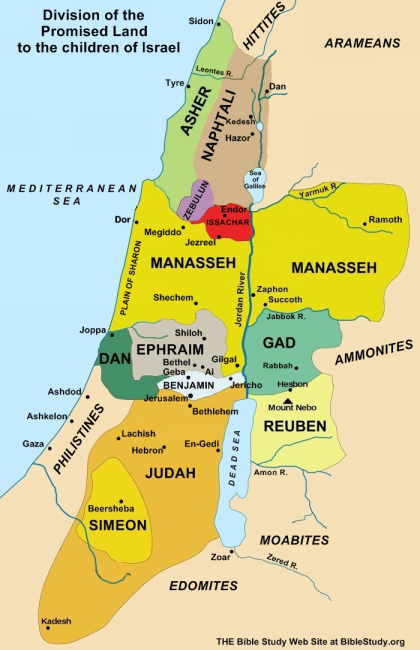 This was a prophetic message spoken over Gad and this is a warring tribe (1 Chronicles 12:8).

They were attacked because of their proximity to enemy territory.  They inherited on the East of the Jordan where there were the Moabites, Ammonites, Edomites. The tribes that were on the west were less prone to the attacks.

David, was a warring king, and some of us are actually made for warfare.  What this prophecy said is that they were attacked but in the end they overcame.  When you attack someone at the heel it’s like you catch the enemy off guard when he’s trying to escape with what was stolen.  You also cripple his ability to attack you again because you go after the movement. We see that God did give them victory in the end (1 Chronicles 5:18-22).

Don’t get discouraged if you lose one battle, you have to think long game.  In the end you will win because if God is for you who can be against you?

This is Moses’ blessing of Gad:

“Blessed is he who enlarges Gad’s domain!
Gad lives there like a lion,
tearing at arm or head.
21 He chose the best land for himself;
the leader’s portion was kept for him.
When the heads of the people assembled,
he carried out the Lord’s righteous will,
and his judgments concerning Israel.”

Again we see the warrior spirit in Gad shown as lion. This is a very powerful blessing because it says that they enlarged their territory through warfare they went after the arm (the enemy’s strength) and the head (the enemy’s authority) and as such enlarged their territory because of their victory.  I believe Jehu, who defeated Jezebel, was from the area allotted to Gad (Ramoth Gilead) which means he could’ve been a Gadite.

Joshua divided up the land between the tribes (by casting lots) with exception to the land that was divided to the East of the Jordan.  Moses was the one who gave the land to them because Gad and Rueben asked for that land ahead of time You can read that in Numbers 32.

I find it interesting that the warring tribe, got the best land.  As the scripture said, they got theirs first!  Reminds me of that scripture we meditated on from 2 Timothy 2:1-7 “The hardworking farmer should be the first to receive a share of the crops“. The most lush and green pastures with plenty of water.  You see, they were the most exposed to the enemy being on the East side of the Jordan.  Also, they had to leave their wife and children and go fight with the other tribes to get their land.  They did work hard because they couldn’t rest until all the other tribes were settled into their own land.

Even the location of the inheritance had purpose in it.  If one of the weaker tribes were exposed to the enemy they might not be able to fight them off.

I can’t add anything to this, it is just Psalm 27 and it is a beautifully written prayer.  Pray it aloud!

2 When the wicked advance against me
to devour me,
it is my enemies and my foes
who will stumble and fall.
3 Though an army besiege me,
my heart will not fear;
though war break out against me,
even then I will be confident.

4 One thing I ask from the Lord,
this only do I seek:
that I may dwell in the house of the Lord
all the days of my life,
to gaze on the beauty of the Lord
and to seek him in his temple.
5 For in the day of trouble
he will keep me safe in his dwelling;
he will hide me in the shelter of his sacred tent
and set me high upon a rock.

6 Then my head will be exalted
above the enemies who surround me;
at his sacred tent I will sacrifice with shouts of joy;
I will sing and make music to the Lord.

7 Hear my voice when I call, Lord;
be merciful to me and answer me.
8 My heart says of you, “Seek his face!”
Your face, Lord, I will seek.
9 Do not hide your face from me,
do not turn your servant away in anger;
you have been my helper.
Do not reject me or forsake me,
God my Savior.
10 Though my father and mother forsake me,
the Lord will receive me.
11 Teach me your way, Lord;
lead me in a straight path
because of my oppressors.
12 Do not turn me over to the desire of my foes,
for false witnesses rise up against me,
spouting malicious accusations.

13 I remain confident of this:
I will see the goodness of the Lord
in the land of the living.
14 Wait for the Lord;
be strong and take heart
and wait for the Lord.