This prophetic word is titled Gold Wave and it is based visions and an encounter I had with the Lord.  This is also concerning the wealth transfer.

Who is this for?  Everyone. There is a general message which is for everyone and then there is a very specific part of the message which will be for individuals. Pray and ask God if the more specific section is for you. 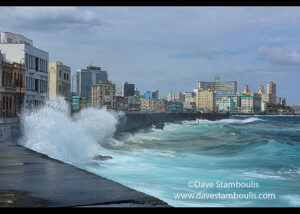 I was standing there with a long line of people on what looked like a seawall by the seashore.  But image that this is a circular wall, and it goes all around the world.  We are all standing in our white robes which means this is only for those who are in the body of Christ.  The believers.

After these things I looked, and behold, a great multitude which no one could number, of all nations, tribes, peoples, and tongues, standing before the throne and before the Lamb, clothed with white robes, with palm branches in their hands,

Now imagine that there is a wave and it is hitting the wall at different times as it goes all around the word.  It doesn’t go over the wall it just come to the line of the wall. It is a Gold Wave. So as I stand there waiting for this wave to go by me the Lord says to me “when it comes by put your hand in it, touch the wave”   As He is talking to me these are not just instructions for me personally, but it is like He is speaking to the body of Christ as a whole because I could see people all the way down the line ahead of me and they were all touching the wave as it went by.

Some touched it and others missed the opportunity because they were not prepared because they didn’t see it coming or were not expecting the wave to be ready to touch it as it went by.  There was no fear though because as with any wave, while it is not stagnant and will not wait for you, it comes around again eventually.

My advantage is that I was standing in close proximity to the Lord and He told me ahead of time to touch it when it comes by.  Therefore, I didn’t miss the first wave. 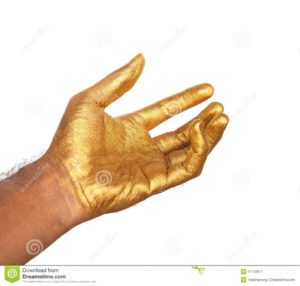 I reached over and touched it as it went by and when I pulled my hand out of the water my hands were coated in gold.  Interesting thing is that the Lord also reached over and touch the water so His hands were also coated in gold.  The ones who missed the first wave looked down the line and saw that the Lord did it so then they made themselves ready and watched as the wave was going around and waited for it to get to them again so they could touch it.

I thought this was interesting because what it meant to me is that there is going to be a group that will see the wave but won’t be 100% sure if it is from the Lord.  They’ll see others moving forward but they are still not sure if it is from the Lord and until the Lord Himself shows up and steps into it, they won’t budge.  Good news is that He is gracious.  And, if He can show up and let Thomas put his hand in His side to prove that He was real, He’s going to do the same for those doubting Thomases as well 🙂  (John 20:27)

“Whatever you touch will turn to gold“

It brought to mind 3 scriptures

Blessed is the man
who walks not in the counsel of the wicked,
nor stands in the way of sinners,
nor sits in the seat of scoffers;
2 but his delight is in the law of the Lord,
and on his law he meditates day and night.

3 He is like a tree
planted by streams of water
that yields its fruit in its season,
and its leaf does not wither.
In all that he does, he prospers.

The Lord will command the blessing upon you in your storehouses and in all that you undertake, and He will bless you in the land which the Lord your God gives you.

It was at that moment that I realize that this gold that came off the wave and unto our hands is a special anointing that the Lord is giving us.  It is an anointing so that whatever He gives you to do in this season of the wealth transfer you are going to do very well!!!  Because you have an anointing that is going to be imparted upon you to do what it is He is giving you to do.

A special anointing for the wealth transfer.  This is new.  It is not something any of us had before.

As we stood there on the shore watching the second wave come around, the Lord then said to me, “this time put your feet in it”

When it came by I put my feet in as the Lord said and He put His feet in too.

Then He said “I’ll show you where to go & what to do” Then He takes off walking down the beach leaving golden footprints as He walked and those of us who had out hands and feet covered followed behind Him.

That’s when I understood that some who dipped their hands twice felt like they needed more time to learn whatever the Lord was teaching them in order for them to successfully walk in or prosper in what He was going to ask them to do.  Like a greater anointing perhaps?  A double portion of an anointing maybe?

It also told me that some of the things God will bring you in this season of wealth transfer is going to be new to some of you.  Things you’ve never done before so you will need to learn about it.  Start small and then ramp up.  Hence, you may need to get your hands or your feet dipped twice until you fully understand and learn about what you will be doing.

Key Points of how the information will be communicated:

(1) I was next to the Lord, and He told it to me before it happened.  I heard it. Prophesy.

I don’t speak on my own authority. The Father who sent me has commanded me what to say and how to say it.

(2) Those who were ahead of me didn’t really hear the Lord, so they were moving by Faith.  They did it and then they looked back and saw Him do it and that was the confirmation for them that it was the correct thing to do. By faith.

Faith shows the reality of what we hope for; it is the evidence of things we cannot see.

(3) Then there were those who didn’t move until they saw the Lord doing it.

19 So Jesus explained, “I tell you the truth, the Son can do nothing by himself. He does only what he sees the Father doing. Whatever the Father does, the Son also does.

We are all different and God speaks to each of us differently so how we all receive the information from Him may be different.  The end result will be the same for all of us.

Our hands and our feet will have a special anointing on it.  Praise the Lord!

Then as I was walking down the beach with Him, I go into a series of visions, and these are very specific:

(1)  I saw different people working on computers so some of you will be working on online based businesses.

(2)  Then I saw someone arranging flowers and this told me this is going to be a Florist business.

(3)  Then I saw someone up in trees.  So this could be either a landscaping business, tree trimming or perhaps you are going to grow trees.

(4) Then I saw someone putting on sneakers and looking down at their feet so this could be someone starting or taking over a line of sneakers or starting a shoe store.

(1)  I saw someone dropping kids off at school, then I saw the hands of the clock move around showing the day going by and then the same person was going back to pick up the school when school was out at 4pm.

With this I believe the Lord was saying that whatever He’s going to give you to do you will have time to still spend time with your children.  He’s not going to bring you something that will make you a slave to the business or your work.  You will drop off your children and pick them up just the same.  Do not worry about this if this was of concern to you.  This may actually be the point that He will use to weed out some of these opportunities that may present themself.

(2)  Then I saw someone playing basketball

(3) Then I saw someone else cycling

Then the Lord said, “I am going to give you time to do the things you love to do.“

(5) I saw someone brushing horses

(6)  I saw another person out in the woods hunting

(7)  I saw another person going to the shooting range

The Lord says “I want you to enjoy your life. Take the time to do that“

18-20 After looking at the way things are on this earth, here’s what I’ve decided is the best way to live: Take care of yourself, have a good time, and make the most of whatever job you have for as long as God gives you life. And that’s about it. That’s the human lot. Yes, we should make the most of what God gives, both the bounty and the capacity to enjoy it, accepting what’s given and delighting in the work. It’s God’s gift! God deals out joy in the present, the now. It’s useless to brood over how long we might live.

He wants you to enjoy your life!!!  I believe even if you don’t see what He has for you you should enjoy your life.  This will bring Him glory.  Even if the ONLY enjoyment you have right now is making a cup of tea and sitting under a tree, then do that!  In whatever small capacity you can find enjoyment in life today you NEED to do it.  I believe by doing that you will tap into this word.

Perhaps I should say it like this, I believe in enjoying your life now, with whatever you have now, you are going to be calling in the GOLD WAVE.  Because you are doing what the Lord is asking you to do now. And, all of us can do it.  There’s nothing stopping us.  Don’t wait on the wave to enjoy your life, enjoy it now.  Plan on it, this week.  Then next week, then the next.  Think about what you can do that would bring a smile to your face and go do it!

Then the Lord said to me next…

“The table in the presence of your enemies is being set. They will be frantic & you will be enjoying your life. Your mind will be at peace in the midst of the turmoil. Just receive it & enter into My rest.

The table is being set as we speak.” 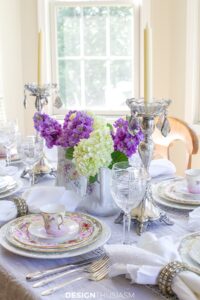 Whew!  How beautiful is that?

Do you have fine China?  Perhaps your way of enjoying life could be pulling it out and enjoying a regular meal with it this week.

Frantic – wild or distraught with fear, anxiety, or emotionally out of control. Conducted in a hurried, excited, and chaotic way, typically because of the need to act quickly.

LOOK and LISTEN for the Lord to tell you when to put your hands and your feet to it.