This prophetic word is title Jack in the Box.  Do you know what it is?  It’s a vintage toy.  I cannot tell the last time I’ve see one of these.  Some people think they are creepy because clowns can be creepy. 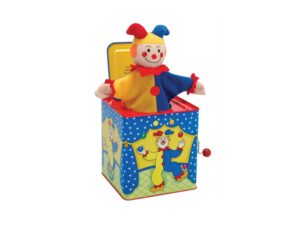 But for this word, I don’t want you to think creepy.  Instead think childlike fun.  Think SURPRISE!  You know exactly what will happen when you wind up the side but for some reason every time it pops out you jump.

Children can hardly contain themselves when you tell them you have a surprise for them.  They never think it’s going to be bad because they know that their parent will only announce it when it is a good surprise.  Then they follow you around wanting to know what it is.  They can’t wait!

God, is always moving with the element of surprise.  Did you know that?

As I reflect on this Easter week, I think about the greatest surprise ever.  I could just imagine how to enemy was salivating watching Jesus walking down that road to His death carrying the cross.  He probably thought this was it.  He’s never going to be seen or heard anymore.  The whole time he had no idea that this was all a part of the plan.  Sunday rolls around…SURPRISE!!!  LOL

By then, it’s too late.  There’s no backtracking at that point.  It’s a done deal!  Bet he didn’t see that coming.  I mean, what a plan!

None of the rulers of this age understood this, for if they had, they would not have crucified the Lord of glory. But, as it is written,

“What no eye has seen, nor ear heard,
nor the heart of man imagined,
what God has prepared for those who love him”—

these things God has revealed to us through the Spirit. For the Spirit searches everything, even the depths of God.

Imagine if someone were to say to Potiphar’s wife, “You see Joseph that you just falsely accused and got thrown into prison?  In two years when you see him again he will be 2nd in command of Egypt”  Tell me if that doesn’t sound crazy.  Bet she didn’t see that coming.  I mean, what a plan! (Genesis 39)

There are so many stories and things that God has kept concealed until the proper time.  It is not meant to be shared or spoken of until the right time.

I think about Boaz.  Don’t you know there had to be many beautiful Jewish women over the years that wanted to be with him?  Don’t you think some father or mother had their heart set on marrying off their daughter to him?  But it never happened.  None of them got to marry him.  Didn’t the men back then have several wives?  But he had none. And the one he ended up with was a Moabite, a widow that appeared to be barren.  He wasn’t even the one that was in line to marry her.  I’m pretty sure no one saw her as a threat.  The man that was in line to marry her, rejected her! He didn’t see what was coming next.  I mean, what a plan! (Ruth 2-4)

Don’t feel bad if you are being rejected.  It is a part of the plan.  They have to reject you so that the right one can find you.

Then I think about Esther and the fact that she has to hide who she truly was even after she became the queen.  It was in that place of hiddenness and concealment that she was able to rescue her people.  Again, Haman didn’t see that coming.  I mean, what a plan! (Esther 2 – 7)

God always has this plan in the background of our lives that is completely concealed. It’s a secret.  At the right time it gets revealed and at that moment the enemy can’t do anything to stop it.  It’s a done deal.

I know some of you may feel like you spoke out of turn or spoke too soon on some things and you may feel like it won’t happen because “the cat is out of the bag” so to speak.  I want to say this to you…if God said it, then it will happen.  You may have caused yourself unnecessary warfare and you may have caused some delay and the way in which it was suppose to happen may change.  But, it will still happen.

I am always fascinated by David’s brothers.  You know, again he is the unlikely king.  Jesse’s red headed shepherd boy son with the half brothers.  He didn’t look “kingly” enough.  He’s the least likely one to the point when Samuel went to anoint him, his own father didn’t even consider him.  Wow!  That has to hurt.  He brought in everyone else except David.  That shows you how much he thought about him. (1 Samuel 16)  Perhaps it was his age because he was the youngest.

But, here it is that Samuel is anointing him in front of his dad and brothers to be king.  THEY KNEW!! We are aware that all of them knew but for some reason when you read about all that David went through none of his “blood” brothers are there.  What happened to them?  The ones who rallied around him were others that God sent and not his own family.

You know when he went to deliver the lunch to his brothers, his eldest brother was pissed.  I think he was jealous and probably thought “here you come to steal the show again”.  Look at what he said…

When Eliab, David’s oldest brother, heard him speaking with the men, he burned with anger at him and asked, “Why have you come down here? And with whom did you leave those few sheep in the wilderness? I know how conceited you are and how wicked your heart is; you came down only to watch the battle.”

“Now what have I done?” said David. “Can’t I even speak?” He then turned away to someone else and brought up the same matter, and the men answered him as before.

My goodness!  He said David was conceited.  Is that not jealousy??? He said he has a wicked heart?  This is the man after God’s own heart.  Talk about false accusations.  And then how condescending was he talking about his “few sheep”.  It’s like he couldn’t see David for who he really was.

I don’t know about you but if the greatest prophet in the land showed up and anointed one of my siblings, even if I wanted it to be me, I would say THANK GOD my brother will be king.  I’d figure out how I can support him, not how I am going to try to undermine him and cut him down.  This is just not very smart.

But you never hear about these brothers helping him.  You know what I think?  Even though the bible doesn’t say this, I think they forgot that Samuel anointed him.

Many times God will say something to us and we can believe it for some time but as the years go by and the more impossible it seems we forget that God said it.  If it doesn’t happen right away, we forget.

I think when David returned to tending to his sheep after the anointing and the years started ticking by they all forgot.  They counted him out. All these years when he’s being chased by one enemy after the other with everyone trying to kill him, I think they really believed he was never going to make it.

They counted him out and forgot about him.

Some of you right now, just as you may have forgotten some of the things God promised you there are others who forgot too.  It’s been years so they just assume it’s not going to happen.  Guess what? Don’t remind them of anything.

They will never see it coming.  I mean, what a plan!

So your future is like this Jack in the Box in that you know or have an idea of what is in the box.  Winding up the side is like winding up a timer, a clock, the countdown to your manifestation.  At some point, this promise is going to make an entrance/pop out.  And, somehow even though you have an idea of what it is you will still be surprised by the timing and how God does it.

Why do you need to know this now?  Whenever you have heavy spiritual warfare it is always a set up for that “Jack in the Box” moment.  A SURPRISE is right around the corner.  And even though you are expecting it, you’re still going to be surprised.

Did the disciples know that Jesus was going to be crucified and resurrected?  Yes, He told them. (Luke 13:33; Matthew 16:21; Matthew 17:22; Mark 8:31) But for some reason on Friday they were in shock, scared and mourning.  Then Sunday rolls around, He’s resurrected and they are surprised!

At the moment of surprise, everything changes and it CANNOT be undone.

“Behold, I am doing a new thing;
now it springs forth, do you not perceive it?”

If you’ve never seen a Jack in the Box before, watch this video below…

14 thoughts on “Prophetic Word – Jack in the Box”

Prophetic Word for February 2021- Pick Up Your Sword