The month of Tevet on the Hebraic Calendar starts December 17, 2017 through to January 16, 2018. This is the prophetic word for the month of January. You can read the word for December 2017 here.

This prophetic word is probably one of the most significant word that has been written on this website. It is significant because the fulfillment of all the prophetic words that we’ve written and others that you will read elsewhere, as well as the personal prophecies that you have received will depend on this one principle.

Every blessing that you will ever receive or promise fulfilled will depend on this one thing.

What is it? unbelief

Mark 6:5-6 The Voice (VOICE) “He could not do any of His great works among them except with a few of the sick, whom He healed by laying His hands upon them. He was amazed by the stubbornness of their unbelief.”

Mark 6:5-6 New International Version (NIV) “He could not do any miracles there, except lay his hands on a few sick people and heal them. He was amazed at their lack of faith.”

Even Jesus couldn’t perform miracles in an atmosphere of unbelief.

What happens when God shows up to perform a miracle in your life and you have unbelief, lack of faith, doubt? Nothing happens.

Now notice that he could heal a few sick. So we know that some things can get done but MIRACLES require an environment of faith.


In order for you to see miracles in your life you must bring your mustard seed of faith to the table.

Matthew 17:20 “Because you have so little faith. Truly I tell you, if you have faith as small as a mustard seed, you can say to this mountain, ‘Move from here to there,’ and it will move. Nothing will be impossible for you.”

For most of us we have faith to believe some things and not others. For example, if I say to most Christians…

(John 6:31) Do you believe that God made manna fall from heaven to feed the Israelites? They would say YES!

(Joshua 6:6-20) Do you believe that Joshua shouted on the 7th time around the walls of Jericho and it fell down? YES!!

(Romans 8:11) Do you believe the resurrection power of the Holy Spirit raised Jesus from the dead?? YES!!

Do you believe that the same Holy Spirit that raised Jesus from the dead now lives in YOU?? At this point, I would start getting a very feeble yes.

Do you believe that the resurrection power of the Holy Spirit that now lives in YOU can perform miracles through you?? Now I would get crickets.  And, those who have that religious spirit would grab their bibles, call their pastor and find all the denominational doctrinal reasons why they cannot do this.

Except, the bible says that you can. The problem here is that it is OK for us to believe God can do it. Jesus can do it. Moses can do it. Joshua can do it. Your bishop or your pastor can do it. BUT, what about you? We have faith to believe that everyone else can do this except us. The common regular man or woman of God.

Romans 8:11 The Message (MSG) “It stands to reason, doesn’t it, that if the alive-and-present God who raised Jesus from the dead moves into your life, he’ll do the same thing in you that he did in Jesus, bringing you alive to himself? When God lives and breathes in you (and he does, as surely as he did in Jesus), you are delivered from that dead life. With his Spirit living in you, your body will be as alive as Christ’s!”

HALLELUJAH!  This is the Word of God!

If you have been redeemed by Christ, given your heart and soul to Him, made Him the Lord and Savior of your life, received His Holy Spirit (regardless of whether or not you speak in tongues), YOU HAVE THE SPIRIT OF GOD LIVING IN YOU.

Now you may be wondering what does this have to do with Tevet? Christmas? Hanukkah? Well, in the December prophetic word we talked about Hanukkah starting on December 12th and going 8 days (December 20th). It is the Festival of Lights and it is a celebration of a MIRACLE.

In 168 B.C.E. the Jewish Temple was seized by Syrian-Greek soldiers and dedicated to the worship of the god Zeus. When the Greeks entered the Temple they defiled all the oils and when the Hasmoneans prevailed and defeated them in 165 B.C.E., they searched and found only one cruse of oil which lay with the seal of the Kohen Gadol (this means the High Priest marked it as holy/undefiled).  This oil would be used to rededicate the Temple back to God.  Hanukkah means dedication.  The oil was only enough to light for one day, yet a miracle happened and they used it to light for eight days. 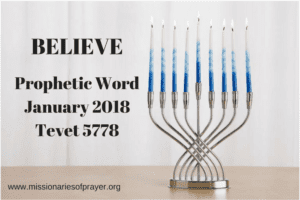 So at Hanukkah, the hanukkiyah which is the candelabrum that holds 9 candles is lit. Why 9? Because one is the servant candle that lights the others. Hanukkah is a celebration of the miracle of the oil.

When we look at Christmas we see the miracle of the birth of Jesus. Imagine the Savior of mankind coming into the world as a baby?? A helpless child? Only God would think of doing this. And to be born in a manger, not some palace or 5 star hotel. Among animals and shepherds. This is a miracle.

And, for those of you who say He wasn’t actually born on December 25th, ok but most theologians agree that the birth likely took place in September. Which means that he was conceived in December. So what do you call the immaculate conception? A miracle.

So, Tevet is a month of MIRACLES. The atmosphere is one of miracles.

You are in a season of miracles.

In order for miracles to operate they have to be in an atmosphere of Faith. You must believe. Unbelief will kill your miracle.

Stretch your hand up and pull the miracle down.

“When Elisha reached the house, there was the boy lying dead on his couch. He went in, shut the door on the two of them and prayed to the Lord. Then he got on the bed and lay on the boy, mouth to mouth, eyes to eyes, hands to hands. As he stretched himself out on him, the boy’s body grew warm. Elisha turned away and walked back and forth in the room and then got on the bed and stretched out on him once more. The boy sneezed seven times and opened his eyes.”

Also, look at what Elisha had to do to bring about that miracle. What do you think that mother would say and do if she saw this man of God laying on top of her son? All kind of rumors would be flying around town. But, I’m sure Elisha got specific instructions from the Lord on how this miracle would occur and what he needed to do to see it manifest.

From this story we learn again that your environment has to be one of faith in order for you to see your miracle. You may need to remove some people from your life to see it happen because all they will do is speak unbelief into your dreams. All they will do is tell you that sister so and so tried the same thing and it didn’t work …Miracles aren’t for today…you know that thing is stage 5 and he has a month to live…Whatever!  What is God saying to YOU!  This is the only opinion that matters.

The next thing we learn is that God has a specific way of getting you that miracle and if others learn of the steps you have to take in order to get that miracle, they’ll think you’re crazy.

So in this month of Tevet, and for the rest of December, write down all of the miracles that you want to see happen in your life. Think BIG. Think IMPOSSIBLE. And, then ask God to perform these miracles. Bring your mustard seed to the table and watch Him do it. Your miracle is in the atmosphere. It is at your front door. Believe.

Here’s a prayer for you…

Almighty God, God of signs and wonders, God of miracles, God of the supernatural, God who formed the heaven and the earth with one word, speak to my spirit, speak to Your Spirit which lives in me, resurrect my faith, bring every dead dream, every promises that I have abandoned back to LIFE, resurrect every prophetic word that You have spoken over me, renew my faith, uproot unbelief, set my doubts ablaze with the fire of the Holy Ghost. Demolish every stronghold of the devil that was erected in my life of unbelief and mistrust. Demolish limitation and lack of faith. Demolish denominational strongholds that have held my faith captive. Pluck up generational word curses of destruction and defeat. Uproot unbelief spoken over me by those who had authority over me. Uproot hope deferred and the bitterness that has set in as a result of it. Plant faith. Plant renewed Joy. Restore Hope. Shine a light on every crevice and corner of my mind, heart, body and soul where doubt and unbelief is hiding and remove it, in the name of Jesus. Plant a mustard seed of faith in those areas of my life. Open my eyes to see the possibility of the miracles around me. Activate faith within me by the Power of the Holy Spirit which lives in me so that I will speak my destiny into existence. Speak my dreams into existence. That I will have the faith to take the steps this year and 2018 to see the prophetic words manifested, in the name of Jesus, Amen.

May the Servant Light, which is Christ, light the fire of Faith within you and set you ablaze to desire the greater works and the miracles of God this season, in Jesus name, Amen.

Have a Happy Hanukkah and a Merry Christmas!!!

Join us for 7 Days of Prayer and Fasting to start the New Year. You’ll only be a part of this if you are on our email list as this won’t be posted on the website. You can also see the prophetic word for 2018 here.

Thoughts or comments? please share with us below.  We love you!